skip to main | skip to sidebar

Due to popular demand (read: gian!), I strongly believe (emphasis added) that we should recommence our futsal session.

Can anyone scout for a new port?
Posted by Anonymous at 2:46 PM 5 comments:

i know i know.it's almost a week since the party.apologies for uploading the photos late.impatient lots u guys are just like moi when it comes to pictures.ngeee.i've uploaded it on facebook or you guys can click here for a quicker view. enjoy 'em!!

to the Law 20 March babies, Happy Birthday!!!
Posted by shueyshoelove at 10:00 AM No comments:

Quote from muna, "one after another tragedies struck Law 20"

As we are all aware now that 2 of our Law 20 mates have loss someone very dear to their hearts. Their own flesh and blood.

One thing that i'm proud of Law 20 is the fact that no matter how segregrated we are or how far apart we are. No matter how ugly catty fights we get into. No matter how misunderstood we can get with each other's behaviour. We're still together as one and nothing can change that.

In both happiness and sorrowness. It's as if there's a silent agreement entered by all of us. Without us knowing. Without us realizing.

Hence, to Mar and Hida. Know that we're all here for you guys; shoulder to cry on or anything for that matter. We're only a phone call away. We love you guys both.

Al-Fatihah to the loss ones.
Posted by shueyshoelove at 9:09 AM No comments:

FUTSAL.
Or Five A Side, as they call it in England.
I think we'd better stick to Futsal lah, since we played more like Four A Side.
And we're independent lot kan...no need to go all Queen's English lah now. No matter how much they claim they invented the game.

Team A
Team B

Tak aciiiiiiiii!!!!!!!! Team A all Grade A amateurs. And Atie pooled all of them in one team. Against us. I was a first timer so I was kinda kaki bangku. More of a burden to the team than a help lah. But I managed a few saves being a keeper. Hehehe... *sheepish grin* All good luck je ...

It's uber fun.
If you don't count Atie & myself falling flat on our arses, me feeling temporarily retarded and blind after my forehead got smashed with the football kicked hard by anak pakcik Rosman (no hard feelings. All in the name of the beautiful game) and Shuey's back receiving the football hard.
Hmmm...thinking about it again, that's what made it uber fun. All those fits and misfits.

And the guys watching closely to the point of ogling from the adjoining court, well, they stayed until the end of our game.
Not flattering but what could we do?
It's hard to ward off admirers if you are born gorgeous.
Just enjoy the attentions lah then.

After an hour, (almost) everyone went semput and tomato red in the face. Not sure whether it's all the energy used and toxins flushed out or the blush result of following stares from the males. Could be both. Haha.

Anyway, enough jabbering.
Hope to see you lasses again in a week or so!!

(My kaki all sakit-sakit as of this is written)
Posted by adina at 2:00 PM No comments: 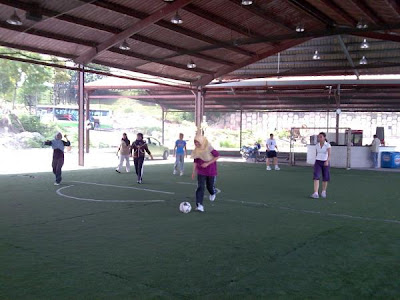 let's kick off again,just ignore the pain,the sengal2 and the bruises..;p..see u gals probably next week(the mastermind, atie will re-confirm later)..don't hesitate to bring yr friends along..the more the merrier..;) 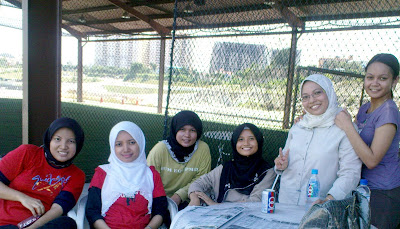